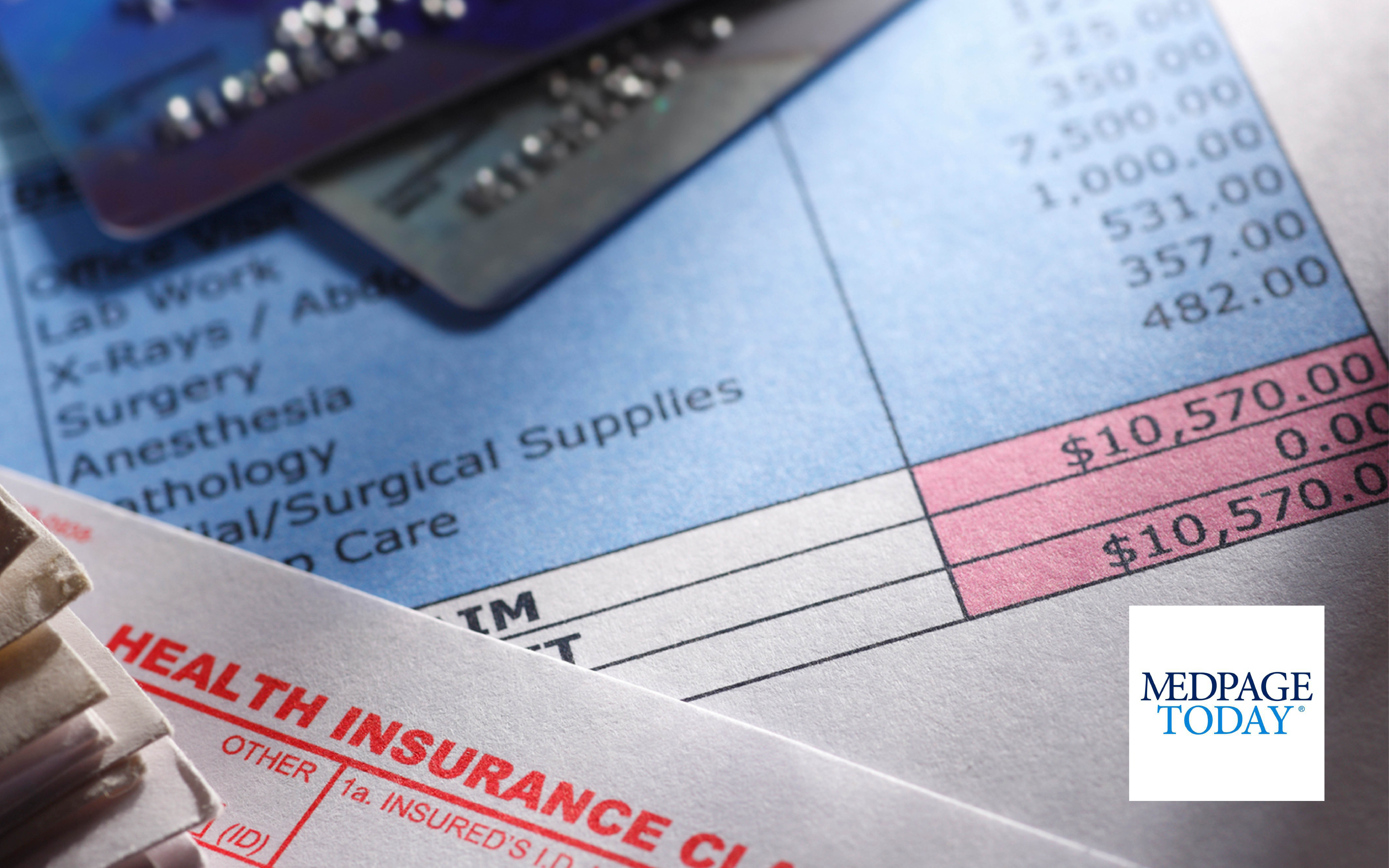 [Opinion] It’s Still About the Cost of Healthcare

— The issue hasn’t gone away, even if COVID temporarily shifted the focus

Prior to March 2020, healthcare was the issue of the 2020 election cycle. Voters consistently ranked it at the top of the list of the most important issues facing the country. Democratic primary voters ranked it as the top issue in every single primary contest. And while other issues topped the agenda for Republicans, the debate over “Medicare for All” was one they were eager to take on.

Underlying healthcare as a central issue was a significant concern around cost of healthcare. A Politico/Harvard T.H. Chan School of Public Health survey from February 2020 found that 80% of Americans believed taking steps to lower the cost of healthcare should be an extremely important or very important priority for President Trump and Congress. Lowering the cost of healthcare topped the list of 22 issues in the survey. A 2019 Gallup survey found that a third of Americans reported that they or a family member delayed medical treatment because of the cost; this tied for the highest percentage Gallup had registered in the last 2 decades.

Empirical data further validate concerns expressed by Americans. Since 1990, health spending per person has grown 344% in the U.S., which is more than twofold the growth in household income (143%). In 2019, health insurance premiums for a family of four eclipsed $20,000 for the first time in U.S. history. And out-of-pocket health expenditures reached a new high of $1,240, as nearly half of employed Americans were enrolled in a high deductible health plan with a $1,000 minimum deductible.

Beyond the pressure on individuals or households, healthcare costs were also recognized as a broader problem for the country. A February 2020 poll found that a plurality (34%) of Americans believed rising healthcare costs posed the greatest threat to the U.S. economy, ahead of disputes with trading partners like China and Mexico, a slowdown in the global economy, and a loss of jobs due to automation.

Coronavirus Temporarily Shifted American Healthcare Priorities
However, in the span of a few weeks, healthcare was replaced as the top issue, ironically, by a health crisis that began to take hold in March of 2020. The coronavirus pandemic forced a different discussion of healthcare, one around public health measures. The corresponding damage to the U.S. labor market and subsequent economic crisis ultimately made the pandemic and economy the top two issues for voters heading into the November 2020 presidential election.

In tandem, the rapidly escalating spread of the coronavirus caused a dramatic drop in healthcare utilization and spending, as hospitals were forced to shut down elective procedures and fears of being infected with COVID-19 kept millions of Americans away from the doctor. Hospitals across the country observed a 36% decline in all healthcare visits at a physical hospital campus and a 26% decline in total non-hospital outpatient visits at the peak of the coronavirus surge. While we don’t yet know the full extent of the downstream health impact attributed to the marked decline in utilization, we know it is significant. 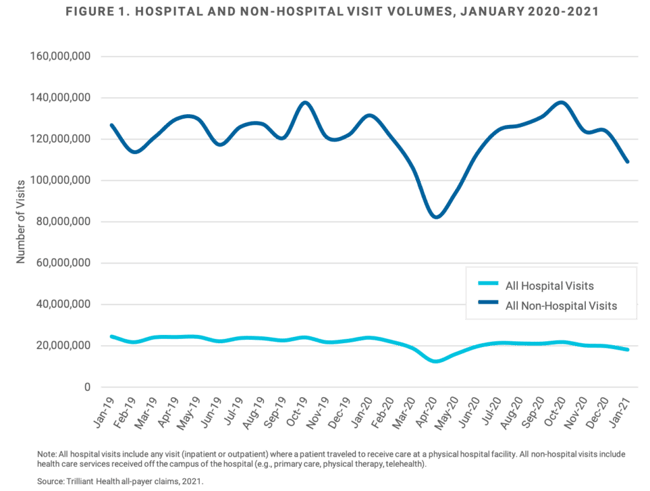 Hospital and Non-Hospital Visit Volumes, January 2020-2021. All hospital visits include any visit (inpatient or outpatient) where a patient traveled to receive care at a physical hospital facility. All non-hospital visits include healthcare services received off the campus of the hospital (e.g., primary care, physical therapy, telehealth). Source: Trilliant Health analysis of all payer claims, April 2021.

Concerns Over Healthcare Costs Will Define Post-Pandemic Health Politics
More than half of U.S. adults are now fully vaccinated against COVID-19 and more Americans are receiving their shots each day — a return to normalcy is not too far. But lost in the return to normalcy is this: the issue of healthcare costs has not disappeared, nor has it been resolved.

Demand for healthcare services is beginning to return across all settings of care. Our analysis of “post pandemic” demand by specific care settings reveal utilization of services is also associated with income. We find that visit volumes are returning faster among the commercially insured population with utilization concentrated in urgent care centers, walk-in retail clinics, and primary care clinics. Illustratively, higher income Americans ($100,000+) constituted the greatest share of urgent care visits after the height of the surge from March to May 2020 (see figure below). The steady increase in utilization across Americans of all income brackets will inevitably resurface the issue of healthcare costs for millions. 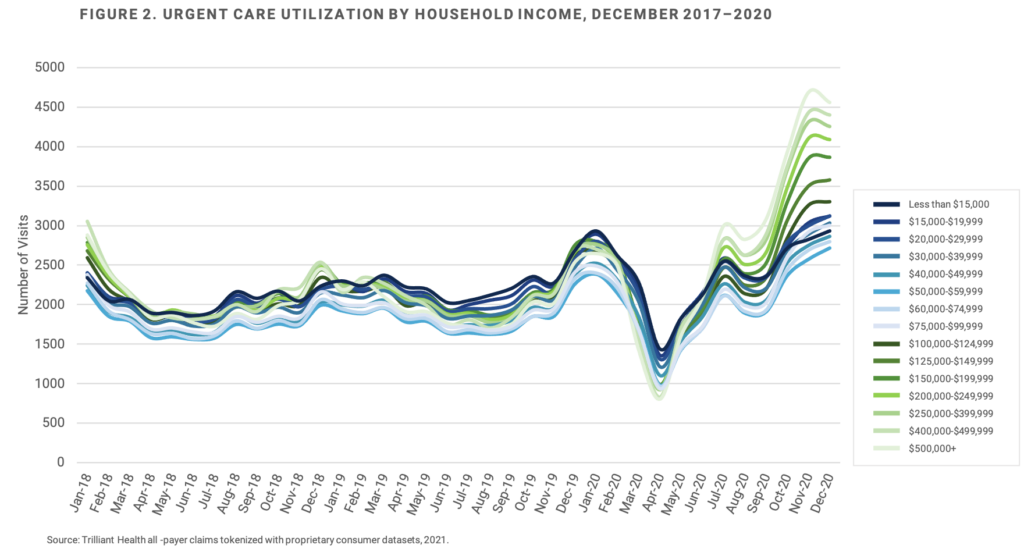 The cost issue is not always evident. After all, a majority of Americans have consistently indicated they are satisfied with what they pay for healthcare, including 67% who said so in November 2020 (it is worth noting that just 30% of Americans express satisfaction with the total cost of healthcare).

But while most Americans express satisfaction with what they currently pay, there are significant concerns about the financial impact of a medical event or illness. A national survey from Consumers for Quality Care conducted in January found the concerns that Americans have when it comes to the threat of healthcare costs:

In a national survey conducted in February, we found that 52% of Americans say reducing healthcare costs such as premiums and deductibles is their most important healthcare issue. While the coronavirus kept many Americans away from medical settings, others stayed away because of costs — more than one-third of Americans (37%) say they delayed care in the last year because of cost.

As we continue moving into post-pandemic realities, price transparency, Medicare for All, and other public insurance reforms will reignite the healthcare affordability debate. As Washington grapples with its dual role as both the largest payer and regulator of healthcare services, the healthcare industry will be tasked with collectively addressing the growing cost burden facing Americans.

Sanjula Jain, PhD, is senior vice president of market strategy and chief research officer at Trilliant Health. Jain also serves on the faculty of Johns Hopkins School of Medicine in the Division of Clinical Informatics and hosts the podcast “Her Story.” Jarrett Lewis, MBA, is a partner at Public Opinion Strategies and has extensive experience conducting survey research on behalf of large health systems and healthcare companies.